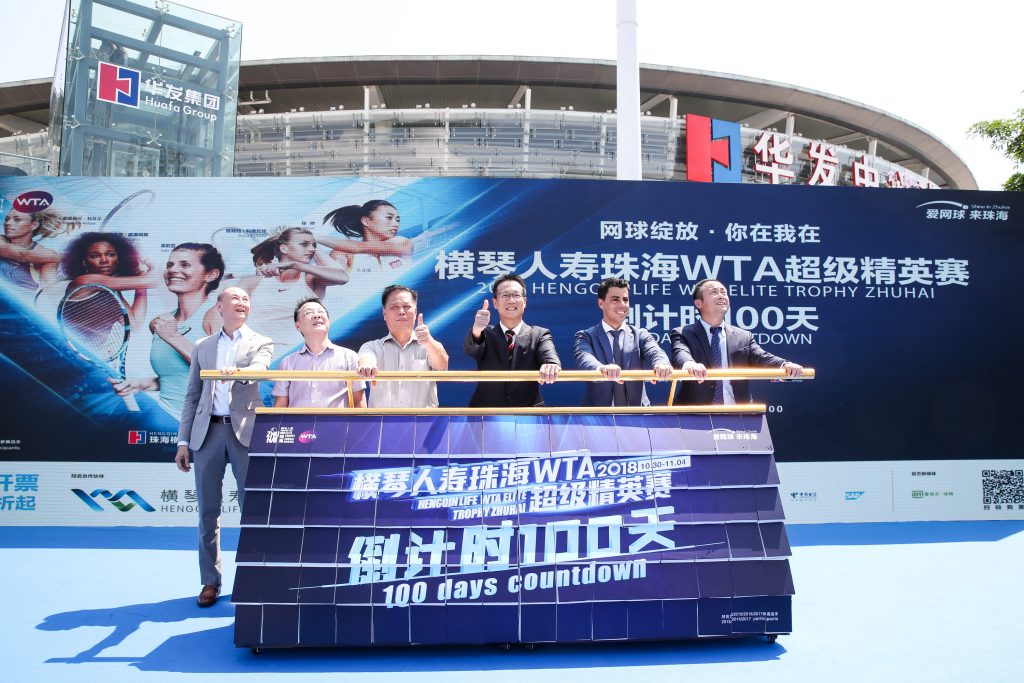 Hengqin International Tennis Center hosted a special ceremony on 21 July to mark the 100-day countdown to the start of the 2018 WTA Elite Trophy tournament.

Scheduled to run from 30 October to 4 November, the Zhuhai tournament is the season finale of the Women’s Tennis Association (WTA) Tour, featuring 12 of the world’s top female players in four round-robin groups.

The organizing committee also announced the launch of pre-sale tickets to the event on the same day, with official sales starting from 1 September. Tickets will include an “Early Bird Offer”, “Old Customer Offer” and “Group Purchase Offer.”

“This year, the city of Zhuhai will again and for the fourth consecutive time host the final act of the WTA season. We want all the people of Zhuhai to be able to come and watch some of the best tennis players in the world vying for the title at the Hengqin Tennis Center,” said Jose Miguel Garcia, WTA Elite Trophy Zhuhai tournament director.

“For 100 yuan, spectators will have the opportunity to not only watch great matches, but also enjoy the all-in-one offer that will be available onsite, from live music to good food and plenty of activities for all ages. We invite everyone to join us in the stadium and let the players feel the warmth and love of the Zhuhai fans.”

The annual event is sponsored by the Chinese Tennis Association and Zhuhai municipal government and is organized by Huafa Group.

It was announced in June that Steffi Graf, the winner of 22 Grand Slam singles titles and the only player to complete the “Golden Slam”, would be the event’s global ambassador for the third consecutive year. Hengqin Life will also continue as the title sponsor of the WTA Elite Trophy Zhuhai for the second year in a row.

Over the past year, more than 1,800 hours of WTA Elite Trophy Zhuhai coverage has been viewed in more than 40 countries and regions on five continents, bringing US$700 million in advertising value to major sponsors, according to the organizer.